Attention Dr. Scholl’s: If you are looking for a paid spokesperson a la Subway’s Jared Fogle, I’m your man. 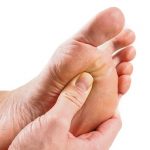 The National Association of Broadcasters announced today the exhibition floor of the 2015 NAB Show, April 13-16 (exhibit floor dates), has been expanded to more than 1 million net square feet.

When I opened the email with the press release announcing what appears to be record-setting square footage for the annual gathering, I think I actually began to feel my feet throb and ache.

A few years ago, I got the wise idea to take a pedometer with me to Las Vegas and wear it during the show. That lasted only one day. Once I found out I covered seven miles in a single day on the convention floor, I figured I was better off not knowing my total for the show.

And that’s from someone who willingly goes on vacations where I carry a 50-pound backpack and head out on a trail for 10 miles or more in a single day.

But there is something far different about hiking down a trail in Yellowstone National Park and pounding the thinly carpet-covered concrete floor of the Las Vegas Convention Center.

So if anyone from Dr. Scholl’s is reading this, give me a call. Maybe we can work something out.