In the course of one’s daily work, basic skills are acquired. Once learned, it’s easy to forget that this essential knowledge may not be widely known by others. Thus, a new generation struggles to reinvent the wheel. 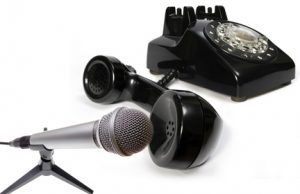 One of those basic skills of all broadcasting is recording telephone conversations. It’s bread and butter stuff for journalists, whether the recording is needed for news reports, interviews, documentary film, podcasts or even note taking. Almost anyone in the media business is faced with the task at one time or another.

Many of us remember that phone recording was not always so easy to do. Even today, I wince when I see a struggling novice with a suction cup on a phone receiver or one of those little cheap plastic adapters from Radio Shack. 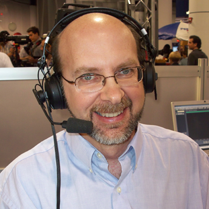 Perhaps the unsung hero of phone recording is Joe Klinger, an audio engineer who spent quite a few years working in a telecom research lab. In 1992, Joe started a small company called JK Audio. Soon after that, telephone recording got much, much easier. 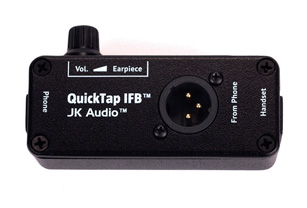 The first is QuickTap IFB ($125), a device I have used almost daily for over 15 years. It has one essential function: to make high-quality audio recordings of two-way telephone conversations.

The QuickTap IFB is an ultra-reliable, passive interface tap that easily slips between a telephone and its handset. It delivers a nice, clean balanced mix of all sides of the phone conversation.

Weighing only five ounces with dimensions of 3.7 x 1.6 x 1.3-inches, the QuickTap IFB works with just about any wired phone system, including analog, digital, PBX and ISDN.

The user unplugs the coily handset cord from the base of the telephone and plugs it directly into the QuickTap IFB. Then, using the supplied cable, connects the device to the base of the phone. That’s it.

There are two outputs. One is a fixed-level 600 ohm male XLR (100 mV RMS, -16 dBm nom.) that can feed phone audio to a mixer, amplifier or recorder. The second is a 600 ohm 1/8-inch jack with attenuator to adjust output level. I use it with a portable audio recorder. It can also be used with compatible IFB earpieces.

I have recorded hundreds of phone interviews using this little box. With a good telco connection, its performance rivals that of expensive digital telephone hybrids costing significantly more. 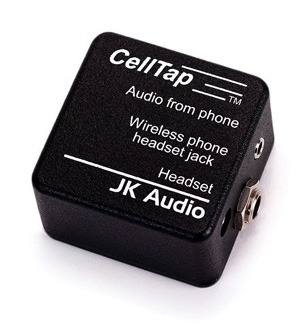 A related JK product comes in handy when I need to record or amplify a conversation over a mobile phone. (The value of this scenario became apparent here in New York City after 9/11 back in 2001.) It’s called CellTap ($79), a simple mobile telephone tap.

Every journalist needs this tiny portable interface in their gear bag. It allows the recording of mobile phone audio with an automatic mix of both sides of the conversation. When landlines are down or a reporter is working in isolated field conditions, the CellTap allows interviews to go on in a completely mobile newsroom.

A 2 x 2 x 1.3-inch die cast aluminum cube weighing only 3.5 ounces, CellTap links together a mobile phone, recorder and earpiece. It comes with two cables. Plug one into the 2.5mm earpiece jack of the phone and the other into the recording device. Then plug your earpiece into the CellTap. That’s it. No levels to set. Just hit record. It’s passive, no AC or battery power is needed.

I’ve also used a CellTap with several portable digital recorders and it always performs flawlessly. The audio is clean and the conversation mix is perfect. As a secondary use, the little box also enables a group to listen to a conversation.

Connect a powered speaker to the audio output jack and, presto, you have conferencing capability. Everyone in the room can hear the mobile phone conversation, but only the person wearing the earpiece can talk to the distant party. While it’s not a substitute for a speakerphone, in many cases the setup is more suitable because it limits the number of talkers. 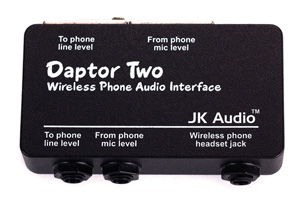 For more sophisticated use, JK Audio also offers Daptor Two ($179), a device that adds the capability of sending and receiving audio from a mixer or tape recorder through the mobile phone. As with the CellTap, your mobile phone will recognize the device as a headset which will disable the phone’s internal mouthpiece and receiver.

Since Daptor Two replaces the headset, the user must provide a microphone and preamplifier, and a headphone and amplifier to allow a cellular conversation.

Also available is the Daptor Three, a wireless audio interface using Bluetooth technology. Like the Daptor Two, it allows balanced and unbalanced connections to your mobile phone. But in this case it works like a Bluetooth headset, allowing a cordless hookup. 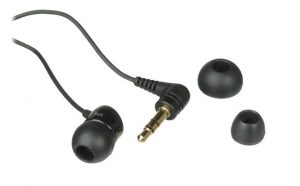 One non JK Audio product has also proven essential at times. It’s the Olympus TP-8 telephone pickup, a tiny earphone-type microphone that works anywhere with any audio recorder. Simply plug it in, put in your ear and record using any telephone. It sometimes saves the day. The price is $13.95 and you can order it from B&H Photo in New York City.

As with a handful of companies we depend upon in our professional lives, JK Audio has filled an important niche in the working journalist’s continuing struggle to conquer the slings and arrows of our nation’s telephone system.

There’s no need to reinvent the wheel when it comes to recording telephone audio. Joe Klinger has already figured it out. Take advantage of his fine tools.