The University of Florida is adapting its GatorVision on-campus broadcast control room for live HD sports broadcasting on the upcoming SEC Network.

After providing initial systems integration, installation and support to develop and deploy the control room in 2012, BeckTV is now continuing its ongoing partnership with the school’s University Athletic Association (UAA) for the expansion. With a scheduled launch in August, the SEC Network will be operated by ESPN and will cover the sports of the Southeastern Conference (SEC). 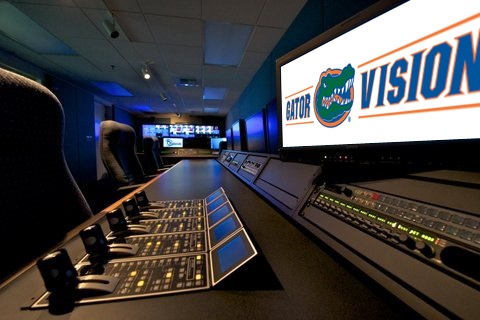 The GatorVision control room is located in the University of Florida’s College of Journalism and Communications building. In partnership with the UAA, BeckTV designed the facility to support HD shows for the Daktronics video boards and the GatorVision streaming video platform from six major sports venues located throughout the campus — the football stadium; the basketball, volleyball, and gymnastics arena; and baseball, soccer, softball and lacrosse stadiums.

The control room also provides a hands-on educational component for radio/television students in the College of Journalism and Communications.

With the launch of the SEC Network, GatorVision will now be responsible for producing and publishing more than 40 broadcasts per year to the network’s digital platform, increasing its workload from an average of 70 shows a year to well over 100.

To accommodate this workload, the control room update includes dual control panels for the Grass Valley Kayak switcher, with one panel supplying feeds to the Daktronics displays and the other to the SEC Network.

Also, the school has expanded its complement of Sony PDW series camcorders to eight — six for tier 1 events such as marquee football games, and at least one for tier 2 events. This expansion will enable GatorVision to produce up to three shows at once; such as an SEC Network broadcast, a video program sent to the Daktronics screens, and a separate digital webcast for another event happening at the same time in a separate venue.

In addition to the Grass Valley switcher, both the GatorVision and WUFT control rooms share resources such as routers, intercom, audio and playback equipment. Since the new control room can mirror the College’s downstairs production facility, broadcasting students in the WUFT studio are able to shadow live productions taking place in the upstairs facility.