There has been a race for years to save television’s aging archives. The videotape long used by stations and networks is a fragile magnetic storage medium that, with time, is prone to instability, degradation and failure.

In fact, no magnetic recording medium is permanent. Those ribbons of cobalt ferric oxide or metallic particles that make up videotape represent technology that’s been with us only a little more than 50 years. But it represents nearly the entire archival history of television.

When the bulk of videotape was being manufactured, few makers of it were truly open about the life span of their magnetic recording media. Even the ones who were, could not be responsible for how the user treated and stored tape.

In the mid 1980s, Sony reported that videotape — when stored properly — should last about 15 years without significant degradation. Stored properly meant that users should have kept the media at a constant temperature between 59 and 77 degrees Fahrenheit, and at a relative humidity level of 40% to 60%. There should be little fluctuation in temperature or humidity to prevent expansion and contraction of the base film.

Of course, few took such good care of their videotape, and most video veterans should have no illusions by now that videotape is forever. I’ve lost count of the old U-Matic, Betacam and DAT tapes that have severe drop outs, or were simply “eaten” by hungry, poor-maintained hardware. 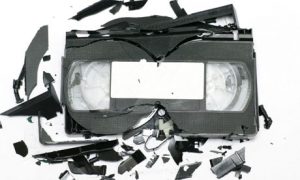 For those who are transferring tape to file-based formats, the big question now is which medium is safest and longest lasting? Is there a completely bullet-proof, safe storage medium that lasts forever? The answer, unfortunately, is no.

One expert told us that’s, in fact, the million dollar question. Even though archival data is now accumulating at 250 petabytes per year, there is still no eternal standard for storage.

Off-line storage today — so-called “cold storage” — usually comes down to a choice between tape-based media, hard disks, optical media, solid state drives or cloud storage (which is really a combination of the previous storage types, but farmed out to third parties).

Decisions on what type of media to use depends on use, cost, ease of operation and durability. Since, none of this storage media is forever, it’s all temporary.

In part two of this report, we’ll look at the various options —pluses and minuses — for archiving video.