Whenever you see the President of the United States speak from his podium, the same microphones are in front of him. In fact, it has been that way since Lyndon B. Johnson was in office in the mid 1960s.

The favored microphone of every modern president is not expensive — it costs about $100. But it is reliable — one of the most reliable microphones money can buy.

The White House now owns 400 Shure SM57s, one of the best selling microphones in the world today. The mic became the lectern microphone of the White House Communications Agency in 1965 — the year of its introduction — and remains so. President Obama always speaks using a pair of SM57s.

“The reason is they not only sound good, but they are almost indestructible,” said Shure’s Michael Pettersen. “They can be up in the belly of a C-17 transport at minus 35 degrees and land in Washington, D.C. in July at 100 degrees on the tarmac and they work.”

Presidents speak in weather that is cold, hot, humid and often wet. One never knows the climate conditions. The White House needs a microphone that sounds good and works in all those environments. All of the presidents always used a wired —not wireless —microphone. 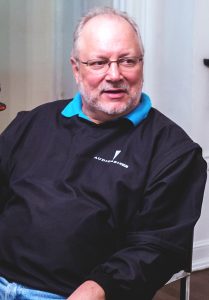 “The President of the United States can afford whatever he wants,” Pettersen said. “But he uses wired microphones. There’s a reason. They are more reliable.”

The Shure SM57, and its sister microphone, the SM58 (with a more robust metal windscreen) are built to military specifications. The old joke is you can drive nails with them.

The “SM” stands for studio microphone. The SM58 has been manufactured by Shure since 1966. The origins of SM57, whose current model has been manufactured since 1965, can be traced to 1937, when Shure engineer Ben Bauer developed the first single-element directional microphone, the Unidyne, which had a cardioid pickup pattern. This year is the 75th anniversary of the Unidyne invention.

A few years ago, Pettersen prepared the following memo for the technicians who provide sound services for the President. He edited a special version for us:

Assumption: The President will speak in a variety of situations, both indoors and outdoors. Weather conditions will vary from very cold to very hot; very dry to very humid; no wind to high wind. Failure of the microphone in any of these situations is unacceptable. In addition, the microphone must endure physical abuse as it is packed and shipped throughout the world.

Here are our reasons. (Shure manufactures condenser and dynamic mics, so our experience is extensive with both.)

1. Mean Time Between Failures: Condenser mics are inherently less reliable because they have many more individual components than dynamics. Every condenser mic has an associated preamplifier which is made up of individual electronic components, all of which have their own rate of failure. Any one of these can cause a condenser mic to fail. The more parts, the more failure possibilities.

2. Humidity and High Temperatures: The combination of these two conditions can cause unwanted noise (hissing, popping, crackling); or change the actual sound of the microphone (frequency response shifts, changes in transient response); or even complete failure. Any of these are likely with humidity levels of 95 percent and temperatures around 100 degrees F. Remember, these conditions can easily happen in shipping and storage.

3. Wind Noise: The mass of a condenser diaphragm (the part that moves when the President speaks) is much less than a dynamic diaphragm. Since it is lighter, it will be much more susceptible to wind noise. Therefore, a large windscreen will be necessary to cut down the wind noise. We predict it would have to be as big, if not bigger, than the A81SW (windscreen) you use now for the SM57. Also, condensers are much more likely to pop from P-words or large exhalations of breath.

4. Long Term Performance: It is well documented that the performance characteristics of condenser mics can often change substantially over time. This will make it imperative that you use mics together that are about the same age. New ones could sound much brighter than older ones. We imagine that would be a difficult task based on your large inventory of products. Dynamic mics are very stable as they age and tend to sound the same until they are retired.

5. Phantom Power: To operate, condenser mics need DC phantom power applied through the mic cables. (We doubt you would even consider battery powered condenser mics!) It is unlikely that the phantom power provided by your Shure mixer would fail, but it could be switched off accidentally. More likely is noise (cracking, popping) caused by bad cables or loose/dirty connectors. This type of noise can appear when phantom power is used. But the same cable and connectors can be perfectly quiet when used with a dynamic mic, as there is no DC phantom power flowing in the cable.

Though much has changed in microphone technology over the years, we still hear the President’s voice through the SM57 and most live music through SM57s and 58s.

Sometimes there’s good reason to stay basic with the tried and true.