In a two-hour news conference for its developers this afternoon, Apple debuted new versions of Mac OS X and iOS 8. Buried in the presentation about a new Mac application for photographs, Apple announced new lower cost iCloud storage that it said will now handle full resolution video.

The mention of video was brief at the World Wide Developer’s Conference in San Francisco and many details were omitted. But Apple’s new software means full resolution HD video sent to it’s cloud service will be available on all Apple devices instantly.

Apple software chief Craig Federighi said the first 5 GB is free, 20 GB is 99 cents a month, 200 GB is $3.99 a month and tiers will be available up to one terabyte. It’s a consumer service, but could be used by small scale television stations and independent news reporters very economically for low volume transmission of stories from the field.

The new Photo app will debut for Apple iPad and iPhone this year and for the Macintosh in early 2015, Federighi said.

Apple demonstrated the new application for still photos that radically upgrades its current iOS applications. It has the ability to crop, adjust angle and improve colors very quickly with a very simple slider.

All the full rez photos and video will sync with iCloud in its original format and resolution, the company said. The files can be viewed by a standard computer browser.

Stay tuned for more information as it becomes available. 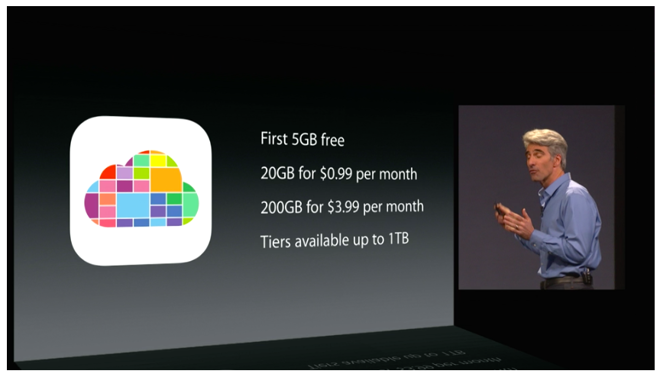