PluralEyes has some competition. Pixelynx Labs in Atlanta, founded in January of this year, has introduced DreamSync, a new super simple audio-video sync application that’s suitable for television news operations.

Founded by Jon Acosta, an independent producer of video and software designer, the idea was to create a easier to use application than PluralEyes for users of basic editing software.

Acosta gives PluralEyes credit for revolutionizing the automatic sync of audio to video. But Acosta said rapid changes in the video business are allowing more novices, even those with iPhones, to participate in the shooting and editing of video.

Though he acknowedged that some editing applications, such as Apple Final Cut Pro and Adobe Premier Pro now have built-in syncing capability, he said DreamSync is far easier and more reliable to use.

PluralEyes, he said, continues to do what it does best, which is use XML exporting for most of the professional editing programs out there. But for users of basic applications like iMovie, Windows Movie Maker and Sony Vegas, users have no way to automatically synchronize audio/video clips together when shooting with separate devices. 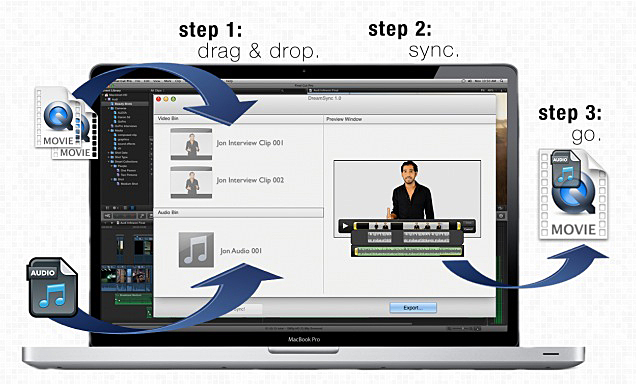 He said DreamSync was created and designed with “simple” in mind, using far fewer steps than PluralEyes. Users drag and drop standalone audio and video clips into the app and synchronized video is output. After the synchronization, the video may be trimmed in the application.

“Our biggest goal is to give users a universal solution to audio/video sync, without having to completely learn a new interface,” he said. “It’s great for television news, or anyone seeking a very simple way to do double system sound with their video.”

There’s a 30 day free trial for the software. The price of the DreamSync is $63.