KERO, the ABC affiliate in Bakersfield, Calif., recently overhauled its Studio A control room and entirely removed its bank of SDI monitors. All were replaced with multiviewers.

The Studio A control room is used for evening news broadcasts. Instead of purchasing more than a dozen costly SDI monitors, KERO switched to four Matrox MicroQuad Multiviewers to be used with four 23-inch LG HDMI monitors to preview up to 16 SDI signals.

Five of the signals come from on-set cameras in Studio A, two come from traffic cameras and one shows weather graphics. Other video feeds come from broadcast trucks out on location or from Studio B, where events such as telethons and a yearly home give-away take place.

Michael Tamson, IS director at the station, says the price of Matrox MicroQuad was attractive and allowed the station save space in the control room while avoiding the cost of multiple SDI monitors. The video quality, he says, is excellent — allowing the staff to see all the details. 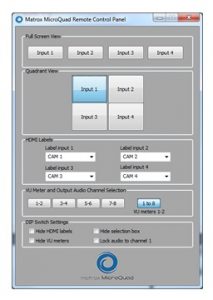 The MicroQuad Remote control application runs on a Windows computer and lets users toggle between full screen and quadrant views, select the input channel, pick audio channels, as well as hide labels and the red input selection box. It also lets users create custom labels of up to 10 characters, which will be retained even when the unit is disconnected from the computer.

“In the past, we have used monitors with built-in multiview capability but we like the fact that the Matrox units are independent, so we aren’t tied to a certain monitor size,“ Tamson says. “When a monitor starts to go off color due to age, we can easily swap it out for a new one. Another nice touch is the screw-in power connector that prevents technicians from inadvertently disconnecting the units.”

Matrox MicroQuad are priced at $995 each.