Solid State Logic has launched its C100 HD PLUS and C10 HD PLUS digital broadcast consoles.

The company’s digital broadcast console range has refined user control interfaces, added software features and streamlined integration within networked and automated broadcast infrastructure. The “Plus” versions of the C100 and C10 consoles bring together additional features and added value to the SSL Production Assistant software to offer users the most powerful and flexible systems SSL has ever produced.

The C100 HD PLUS Large Format Broadcast Console is designed to offer a complete production solution for news and sports in a single standard high power configuration. Whether the application is an automation controlled web channel through to the largest of sports productions, SSL said the new standard processing configuration of the console delivers more processing than ever before in an SSL broadcast console.

SSL’s third generation digital broadcast console has redundant Blackrock Processor cards in a 2U rack. It processes 588 audio mix paths with 256 channels of six band EQ and 284 channels of dynamics with 512 channels of integrated MADI I/O.

The console features a new 10-inch screen, which can be used to display any HDMI video source and enables the user to select from a wide range of metering options. The console can be specified with SSL’s LMS-16 Loudness Monitoring system to provide highly configurable 16 x 5.1-channel Loudness and True Peak monitoring. The control surface has also been re-designed to facilitate clearer channel identification in a wider range of lighting conditions. 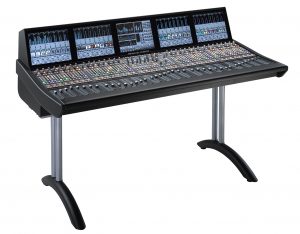 Solid State Logic said the new C10 HD PLUS is the world’s most powerful Compact Digital Broadcast Console. With frame sizes from 16 to 48 faders, the self-contained fanless console can be built into vans for ENG operations, specified for network scale sports productions or is ideal for all-round production demands in mid-scale broadcast facilities.

The button-driven surface is easy for new operators while a new feature set provides all a broadcaster needs for the most sophisticated production.

Integrated into the C10 HD PLUS, the Blackrock Processor card offers 216 audio paths with 160 channels of six band EQ and 188 channels of dynamics with 512 channels of integrated MADI I/O. The C10 HD PLUS also features a redesigned fader panel color scheme.