This weekend, in 1926, Western Electric, the manufacturing arm of the American Telephone & Telegraph Co. (AT&T), and the Warner Brothers film studio introduced Vitaphone, a new process that enabled the addition of sound to film. The technology started the era of “talkies.”

By the mid-1920s, several competing systems had been developed to add sound to motion pictures. In 1923, inventor Lee de Forest demonstrated Phonofilm, in which music was recorded on a narrow strip at the edge of the film.

When De Forest tried to sell Phonofilm to the major Hollywood movie studios, however, they rejected it, dismissing “talking pictures” as a novelty that was not worth the cost. De Forest’s sound-on-film system evolved into the Movietone sound process, introduced in 1927.

The major studios also turned away Western Electric, makers of Vitaphone, in 1925. The Vitaphone system logged sound on a record linked electronically to the projector, keeping sound synchronized with image.

Because the precise alignment of projector and phonograph had to be set by hand, the system was prone to human error. Also fitting a movie theater for a Vitaphone sound system was extremely costly.

Warner Brothers, then a minor studio, decided to act aggressively. It sank $3 million into the promotion of Vitaphone, which the studio announced it would use to provide synchronized musical accompaniment for all its films. 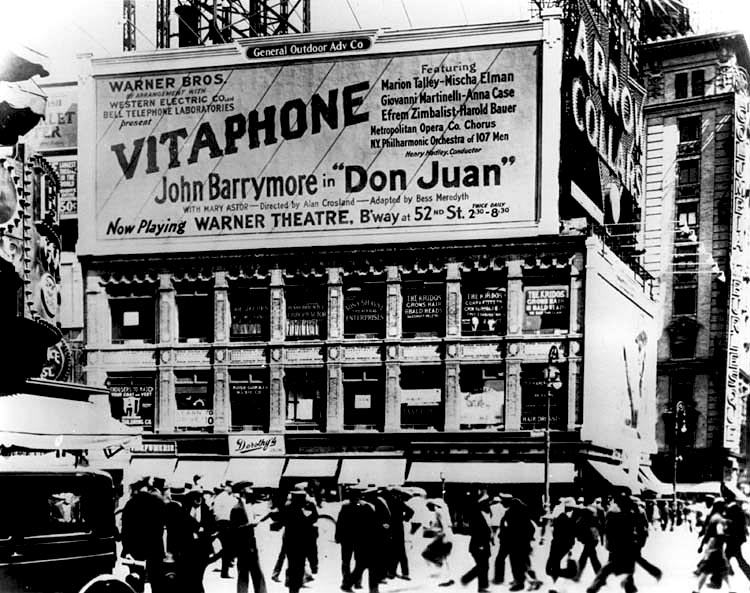 Vitaphone debuted in August 1926 with the costume drama, Don Juan, starring John Barrymore and featuring an orchestral score by the New York Philharmonic.

The following year, Warner Brothers released its second Vitaphone feature, The Jazz Singer, which included classical and popular music, as well as about 350 words of dialogue.

The success of these two films led directly to the motion-picture industry’s conversion to sound, as the major studios quickly lobbied to gain the rights to use Vitaphone as well.

Warner Brothers agreed to give up its exclusive rights to the system in exchange for a share of the royalties, and by the spring of 1928 virtually every Hollywood studio had jumped on the sound bandwagon.

An interesting side note was the filming of Show Girl in Hollywood, an early talkie film, at the First National studio lot, now the Tribune-owned KTLA Studios, on Sunset Blvd. in Los Angeles.

The film features Alice White, then girlfriend of the film’s director Mervyn LeRoy, in a part suited to her perky personality. The film has many scenes of the First National studio lot. It features two big production numbers that were originally filmed in Technicolor.

Silent star Blanche Sweet turns in an outstanding and naturalistic performance as the star who is over the hill at 32. And the Vitaphone recording process is on view prominently during the I’ve Got My Eye On You production number.

This film used Vitaphone disks being cut while filming. The three cameras are shown grinding away simultaneously from inside their large box-like soundproof kiosks.

The film was released in April 1930. But Warner Brothers had already started its switch from disks to sound-on-film like all the other studios.