It’s turning up roses for Apple at NAB. Add Sony to the growing list of companies announcing the addition of Apple ProRes on-board recording as a future hardware upgrade option for Sony’s F5 and F55 CineAlta 4K cameras. Panasonic, Black Magic and AJA also announced ProRes compatibility with their cameras at NAB. 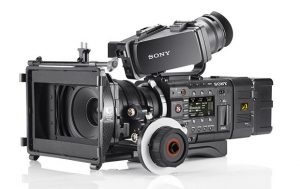 ProRes is a lossy video compression format developed by Apple for use with its Final Cut Pro software for post production that supports up to 4k. It is the successor of the Apple Intermediate Codec and was introduced in 2007 with Final Cut Studio 2.

ProRes is a line of intermediate codecs, which means they are intended for use during video editing, and not for practical end-user viewing. The benefit of an intermediate codec is that it retains higher quality than end-user codecs while still requiring much less expensive disk systems compared to uncompressed video.

It is comparable to Avid’s DNxHD codec or CineForm which offer similar bitrates and are also intended to be used as intermediate codecs.

ProRes files will be stored and recorded internally to the F5 and F55 via Sony’s SxS PRO+ memory cards, which were specially designed to handle mission-critical applications. Compared to competitive card formats, Sony’s SxS PRO+ cards are far less prone to file corruption due to their advanced design, robustness and sustained writing speeds of 187MB/s.

“The F5 and F55 cameras were carefully designed based on direct customer feedback, and with Sony releasing multiple firmware updates with powerful features, the ProRes codec is on the hot list of requests for us to implement,” said Peter Crithary, marketing manager for CineAlta Cameras at Sony.

“ProRes is well established and extremely popular for many creative professionals worldwide, and we are very pleased to add this into the F5 and F55 cameras, joining a rich selection of codec choices.”

For those who already own or are purchasing the F5 and F55, ProRes will be available as an option board.