Occasionally, a very small idea develops into a big one. This is the case with RØDE, the Australian microphone company, who recently released the inexpensive smartLav, a professional quality lavaliere microphone with a difference.

The difference is its TRRS connector is plug and play compatible with Apple’s iOS, which is used on iPhones and iPads. The Apple device is magically turned into a professional-quality audio recorder. This is big news for multimedia journalists who typically carry recording gear and cameras everywhere they go. Since I was one of the first of these journalists long before it was cool, I recall clearly that it took years of trial and error to get to where the smartLav is today.

It began more than a quarter a century ago, when Millimics from Professional Sound Corp. of Los Angeles arrived. This was big news for people like me. These were the first high-quality, very low voltage lavaliere mics that would work on Sony’s then new “Plug in Power” connectors on audio recorders. The connector was for designed to power consumer condenser mics from the audio recorder.

What the supporting companies of “Plug in Power” didn’t say is the circuit supplies 2.71 volts to mic connectors. The MilliMics would work on this voltage, rather than the typical 48 volts needed for professional condensers prior to then.

This allowed me to a tap into a form of “phantom power” on consumer portable audio recorders. I had two of the MilliMics especially wired to use this power. Each mic also went to a different stereo channel. These mics became trusted friends over the years—ones you could count on time after time to deliver great audio on a consistent and reliable basis.

Those Millimics, however, didn’t come cheap. They were more than $250 each when they came out — not counting the cost of constructing the custom rig to work with the consumer electronics.

RØDE’s smartLav has come a long way since since those days. The smartLavs cost only $60 each and work very well in interview situations. The mics function flawlessly with RØDE recording apps or dozens of others for iOS devices. Many are free of charge. Garageband, with its huge audio meter, is a favorite of mine because the levels are so easy to read. 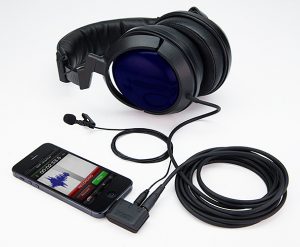 Also, RØDE has a neat accessory called the SC6 input/output breakout box ($20) that allows users to use up to two smartLav mics simultaneously plus monitor the audio with headphones. It’s a tiny little connector that plugs into the audio jack of any Apple device. Unfortunately, the two mic inputs are recorded on the same channel.

Coupled with Red Giant’s PluralEyes 3, the smartLav, any Apple iOS recording device and any DSLR video camera allows you to do double system video sound. PluralEyes works with Final Cut Pro, Premiere Pro, Media Composer and Vegas Pro, and you can export media files for use with other NLEs.

Monitor the sync with an interactive timeline and visual feedback, and use built-in fine tuning controls afterward. Syncing up sound from various sources is a piece of cake. It happens in seconds and works flawlessly.

These are major developments for multimedia reporters. Since most of us operate these days as one-man bands, the weight of these new tools is negligible. I carry two smartLavs and an SC6 everywhere I go now. I use an iPad Mini for audio recording — no more separate audio recorder. Cameras for video sync are also everywhere today.

It’s a new day for audio-video storytelling for those who embrace it. Only when you’ve lived through the past, can you fully appreciate what one can do with today’s new technology.