At the upcoming NAB Show in Las Vegas, FOR-A will show a new version of its FT-ONE 4K super slow motion camera. The new camera offers fiber I/O connections built directly into the unit when shooting from the field. The company’s new ZE-ONE 4K extraction system will also make its first NAB appearance. 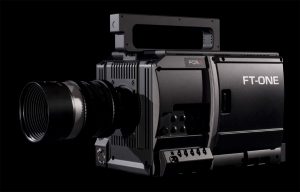 Since its introduction into the market in 2012, the FT-ONE has been used for a NASA rocket launch and in a variety of digital cinematography and sports broadcast applications, including professional football, boxing, automobile racing and ice cross downhill events.

The FT-ONE employs a high-sensitivity CMOS color sensor — the FT1-CMOS — and plays back full 4K (4096 x 2160 pixels). One output channel can provide QFHD (four 1080p 3G-SDI) outputs, while the other output channel provides down-converted HD-SDI for live viewing and play back.

The FT-ONE captures images as uncompressed raw data on the system’s internal memory, which has a recording capacity of 9.4 seconds. This data is then stored on one of two hot-swappable SSD cartridges, each of which is capable of storing 84 seconds of full 4K resolution images at 900 fps.

The 4K extraction system provides operators with a touch-screen interface to frame and extract specified HD scenes at any size from 4K sources. The ZE-ONE allows users to zoom in or out and includes an embedded audio delay processor.

“We’re now offering the FT-ONE with fiber connections built into the unit, making it easier when the production calls for the camera to be used a far distance away from the base station,” said Hiro Tanoue, president of FOR-A in America. “We’ll have a new replay controller for the ZE-ONE extraction system, which allows operators to frame and extract specified HD scenes at any size from 4K sources.”

FOR-A is a manufacturer and distributor of video and audio systems to the broadcast, postproduction and professional video markets.