The year 1975 represented a pivotal time in television news. The 16mm film era was coming to an end, being slowly replaced by portable video—or, as they called it, “electronic news gathering” (ENG for short). 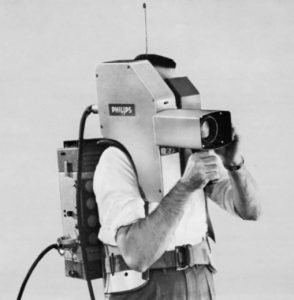 But before the networks decided to transition from film to video, there was a backstory to video. Of course, we had the “broadcast quality” space suit-type backpack cameras earlier, but they were far from perfected for everyday news use.

One of the very first examples of reliable, news-style video was revealed at the 1968 Democratic National Convention in Chicago. I was a 16mm cameraman at that convention and turned in the street violence one day to eye the first portable “Portapak” video package from Sony in Japan. It was the first truly portable video package I had ever seen and it made quite an impression on me while carrying that back breaking film camera.

The Sony Portapak was a two-piece, battery powered, self-contained video tape analog recording system that could be carried and operated by one person. Because earlier “portable” television cameras were so large, heavy and cumbersome, the Portapak made it possible for individuals to record video easily outside of the studio.

Although the early video systems recorded at a lower quality than broadcast studio cameras, the Portapak was revolutionary as a new method of video recording and would light a torch for the revolution to come. Once we all saw it, there was no turning back. 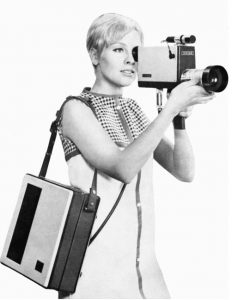 Before the Portapack affected TV news, its introduction had a major influence on the development of video art, guerrilla television and activism in the early and mid 1970s. Video collectives such as TVTV and the Videofreex utilized Portapak technology to document countercultural movements apart from the Big Three television networks.

The Portapak was also a crucial technology for the Raindance Foundation, a collective consisting of artists, academics and scientists, motivated by the potential of the Portapak and video to develop alternative forms of communication.

Because of its relative affordability and immediate playback capability, the Portapak provided artists, experimenters and social commentators the ability to make and distribute videos apart from well-funded production companies. It helped trigger a range of activity linking video with social change. 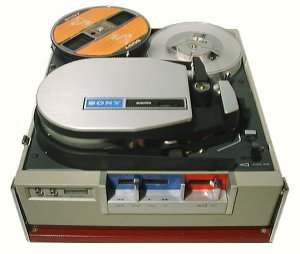 As a footnote, Lord of the Universe, which won a 1974 DuPont-Columbia Award, was the first Portapak documentary produced for national television.

Beyond video art and documentaries, the new generation of portable video gear was also spawning a larger transition from film to video in mainstream media. It was there that I saw a new business opportunity for myself. I figured portable video was a place I could grow and simultaneously control my own destiny. I was both right and wrong.

I went to my mother and borrowed $12,000, enough to get my feet wet in video. I purchased a color Sony Portapak and some other associated gear, and hung out a shingle as a videographer. It’s hard to communicate to a generation who has grown up with reliable video technology just how unreliable that early gear was. Often we would do jobs and find out there was no video at all recorded on the tape. It was terribly frustrating, for both for me and my paying clients.

Video in those days was so rare that, despite the hit or miss technology, we did make a little money that first year. But it wasn’t enough to sustain a real longterm business. 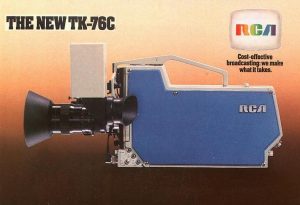 In 1976, at the National Broadcasters Association convention in Chicago, which I attended for the first time, RCA introduced the TK-76, the worlds first portable broadcast-quality television camera.

Coupled with a new Sony portable video recorder using ¾-inch U-Matic cassettes, came the first professional video package for broadcast use. It would, quite literally, change the world.