Ross Video will introduce its Vision Tritium production switcher at NAB on its 40th anniversary in business.

Carbonite, Ross’ mid-size production switcher series, will also be upgraded with new features at NAB. Upgrades will include MiniME and MultiScreen processing technologies. The features are available as a free software upgrade to all Carbonite customers (downloadable from the Ross website).   MiniME’s can be used anywhere in the signal flow, either as pre-keyers or as independent transition engines. MiniME’s produce a layered composition such as a virtual set background with a chroma key and an OTS DVE.

The Carbonite C2S is Ross’ new 24 button, 2ME panel incorporating individual ME Effects Memory keypads. The C2S is ideal for sports and other productions in which the TD prefers to switch the show directly from the memory keypad. The C2S has all the features of the popular C2M panel, adding a dedicated ME Effects Memory control area in each ME.

DashBoard is Ross’ free facility control software that controls everything from the company and our openGear and DashBoard Connect partners as well as a variety of other UDP, TCP and HTTP devices. Version 6.1 will launch at NAB and provides PanelBuilder, the ability for anyone to build CustomPanels and Automated Workflows. PanelBuilder makes customized control quick and easy via an intuitive drag and drop mode for building CustomPanels.

At NAB, OverDrive takes the biggest leap forward since its initial release with the North American debut of OverDrive Caprica. It adds the ability to control third party production switchers. Non-Ross production switcher customers can now enjoy the benefits of automating with OverDrive.

An update to Inception News will be shown. Ross’ newsroom computer system blends the needs of traditional linear channel production with the requirements of web and social media content publication. 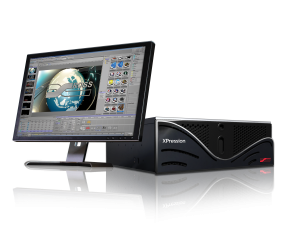 XPression motion graphics now offers solutions for virtually every type of onscreen live graphics requirement. It offers everything from live character generation to branding to virtual sets and augmented reality.

New in the NK Series Routing systems is the NK-144 which can now be upgraded to include the functionality of up to two Carbonite production switchers internally becoming a full Carbonite eXtreme. This product combines facility routing with production switching and multi-viewing all in a single rackframe, simplifying system cabling and distribution.

Ross is building a fleet of these vehicles to offer full production packaging and rental services. OT1 is a platform that Ross will be soon making available in detailed designs so that other truck companies can build this new open standard vehicle.