“If you have just one person running master control at $10.00 per hour it is costing you a minimum of $1,500.00 a month,” says the pitch for Outsource Master Control. “Every time your system locks up and you credit a sponsor or advertiser, it costs you money. They call in sick, you’re stuck. They quit, you’re stuck.”

OMC is run by Gil Couch, a veteran broadcast engineer who used to work for Sinclair Broadcasting, and Dr. Lucas Fry, the current general manager of WLFT in Baton Rouge and the builder of WLCN-TV in Charleston, SC. The pair got their start in central casting and then discovered a new niche in the broadcast station market.

“We had a client that called on a Sunday from one of our stations,” Fry said. “‘Why is my church service not running?’ the client asked. There was no one at the station on weekends. We found out that their master control system had crashed at 8 o’clock that morning. That station had to refund $6,000 to their clients that day for lost programming. That’s how the idea began, we realized that no one was watching a lot of these stations.” 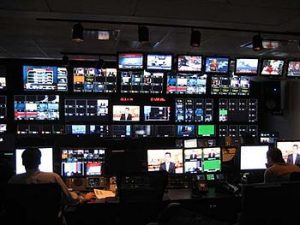 Fry said his company differs from larger central casting services because their service involves no selling or installation of new equipment at client locations. “We run your existing equipment. The others have a facility and they fiber feed a signal to your transmitter. They run everything about your station from one facility. We don’t do that.”

Instead, Fry said, OMC installs low-cost IP monitoring and restart equipment at client stations and can monitor four continuous channels as streams. Their 24/7 monitoring facilities are redundant. One is in Baton Rouge and the other in Rockledge, Florida. If something goes wrong, the company can call in and restart the stations’ equipment. Their proprietary gear is completely agnostic and works with any brand of master control gear.

OMC offers its services a la carte, ranging from limited overnight and weekend remote master control to complete turnkey services for a single monthly payment. Options include include 24/7 complete traffic and billing, on-air control of up to four subchannels, FCC filings and engineering services.

They also offer an optional traffic system that allows a local sales staff to have real-time access to all avails and to insert new orders and commercials instantly. Commercials can be sent to OMC and inserted remotely via IP.

In the first three months operation, OMC is monitoring six low power stations and has signed its first large group broadcaster with over 30 full power stations. “The ink is barely dry and I can’t disclose their name yet,” said Fry. “But they want us to run their stations after hours and on weekends.”