The Winter Olympics are in full swing and each day NBC tries to dazzle viewers with the latest in new television technology. But sports television wasn’t always so innovative.

It actually came of age in the 1970s and was largely the work of a single man — Julius Barnathan. For 16 years, Barnathan was the president of broadcast operations and engineering at ABC. During his tenure, he practically invented the modern technology of television sports.

Barnathan introduced the use of hand-held and miniature cameras at sporting events. He adapted slow-motion technology to color cameras and had ABC put up the first $1 million to develop it. Barnathan also pioneered the broadcast use of animated graphics, instant replay and the split screen. He introduced the small inset pictures behind on-camera anchors.

He developed the use of long lens cameras to capture sporting events that took place over great distances. The technology was introduced at the 1976 Olympics in Innsbruck, Austria. The camera allowed ABC to show the whole mountain during downhill ski races.

“The first priority was creativity, and the second priority was cost,” said the late Preston Davis, Barnathan’s successor at ABC’s BOE. “A lot of people got those things backwards, but Julie always believed that we should find ways to use technology  to drive the creative process and we’ll worry about the cost later.”

Dick Ebersol, a senior advisor and former president of NBC Sports and previously with ABC, said Barnathan was “a brute force for change in the way Americans saw sports.”

In 1992, as Barnathan was about to retire at ABC, I interviewed him. Though he was credited with some of the greatest technical innovations in recent television history (including closed captioning), I told him I found it interesting that he was a non-engineer by training.

“I could see the forest for the trees,” Barnathan said, proud of the fact he was not an engineer. “I didn’t let the fact that something hasn’t been done before bother me. I didn’t know how electrons work and could care less.” 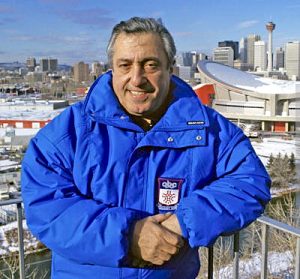 I suggested that he had forced a lot of broadcast engineers to put things in plain language. He laughed.

“Exactly. I’m still doing that. At least half way.”

When dealing with people designing and building television equipment — whether they were inventors working in a garage or major corporations — Barnathan refused to make purchases unless the manufacturer agreed to standardize their product.

It’s said that Barnathan, with this philosophy, single handedly forced the adoption of the Type C one-inch video format over competitors. I asked him why standardization is so hard.

“The not invented here thing,” he responded. “If the first guy is there by himself, he doesn’t want to standardize on somebody else’s standard. We didn’t threaten them (the manufacturers) but we told them we want a standard or we are not going to buy. We’d say if you are coming up with a new format, why can’t you come up with it together?

“We got a standard on one-inch because it was to the manufacturers benefit to get together. It was a bonanza for them and thousands and thousands of machines were sold. Instead of making inventions and finding out how they can be used, we would be better off if would could find out what our needs are and then try to invent to solve the needs. That’s my criteria for looking ahead.

“I don’t care what the technology is — I’ve said this all my life — the program is the thing. You give me a good program and you’ll get the audience. The technology does not matter. The technology of The Honeymooners and the original I Love Lucy…forget it. There was no technology. But they are the greatest pictures you’ll ever see in your life because of the wonderful programs they were. That’s really what its all about. How do we get programs made, that’s the major problem.”