Miranda Technologies will provide Densité modular signal processing, iControl, monitoring solutions and Kaleido multiviewers to NBC during its production of the Olympic Winter Games in Sochi beginning later this week.

NBC will use Miranda’s technology to manage and prepare the huge number of signals the Broadcast Operations Center will receive from the various venues. Using Miranda’s Streaming Media Encoder (SME) card, NBC will create a closed-circuit IPTV monitoring system to view critical signals from any location equipped with an IP or WiFi connection.

The production of NBC’s telecast, as well as feeds provided for all of NBCUniversal networks and worldwide partner broadcasts, will be managed using a series of Miranda infrastructure components including the Densité XVP-3901 up/down/cross converter. Broadcast signal feeds will be controlled by NBC operators using information powered by iControl automated monitoring and Kaleido multiviewers.

The software is standard on ChyronHego’s Mosaic platform. Together, Lyric PRO and Mosaic form the cornerstone of BlueNet, ChyronHego’s graphics creation and playout workflow system.

Avid will provide content creation, media management and storage to streamline workflows and improve operational efficiency during the broadcast. 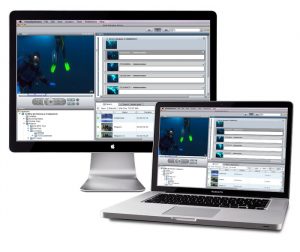 “Broadcasters face relentless pressure to connect and automate the entire creation-to-consumption workflow — especially for a production as complex and demanding as the Olympics,” said Louis Hernandez, Jr., president and CEO of Avid.

In addition to the Interplay MAM, the NBC broadcast center will also be outfitted with Avid Media Composer and Symphony editing systems connected to an Avid ISIS 7000 with 384TB of shared storage system. The Olympic Venues are each equipped with a 64TB ISIS 5000, AirSpeed 5000 and Interplay Production systems with connectivity back to the IBC.