Very rarely in the technology industry do the stars align in such a remarkable way. Last month, Shure was presented an IEEE Milestone award for a microphone technology invented in the 1930s that literally changed the world. It’s the stuff of legendary audio history.

First of all, a IEEE Milestone award is very, very special — only 137 have ever been presented. They go back to Benjamin Franklin’s work on electricity in 1751 and have included awards for the transcontinental telegraph in 1861, the first intelligible voice transmission over electric wire in 1876, Thomas Edison’s lab in 1887, Marconi’s early wireless experiments in 1895, the transmission and reception of radio signals in 1901 and the first satellite transmission of television in 1962.

For Shure, this award came on the 75th anniversary of the 55-series Unidyne microphone, first introduced in 1939. These mics were used by nearly every major figure in the 20th Century, was nicknamed the “Elvis Mic” and is still made today. It’s the longest-running audio product in history. The current versions are the Shure Super 55 and 55SH Series II.

Though the iconic art deco microphone design is incredibly seductive, it was the technology behind it that made history. A newly graduated engineer, 25-year-old Ben Bauer, developed an acoustical method that produced a directional microphone using only one microphone element. Bauer found that by utilizing time delay networks on sounds arriving at openings at the back of the mic, he was able to achieve controlled cancellation and produce a cardioid pattern. Shure called it the “uniphase” principle.

Before that time, directional microphones were complex devices that required a pair of specially aligned capsules. Today, Bauer’s invention is the standard for all microphone companies and the basis for Shure’s extremely popular SM-57 and SM-58 mics, used by everyone from the President of the United States to urban garage bands. 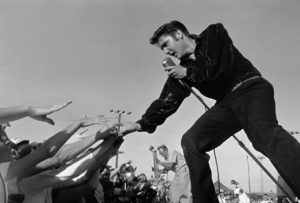 Bauer’s story is equally remarkable. Originally named Baumzweiger, he was born in Odessa Russia in 1913. His family fled Russia after the 1917 revolution and relocated to Cuba. At the age of 17, and speaking little English, Bauer moved to New York City to attend the Pratt Institute.

When he graduated in 1937, Bauer joined Shure full time as a transducer development engineer. It was the start of a distinguished career in acoustics and audio that included over one hundred patents.

Bauer’s most significant invention was the first directional microphone that used a single dynamic mic element. A single element reduced the size, weight and manufactured cost of the microphone, while increasing reliability and improving the acoustical performance.

Ben Bauer created one of the true icons of the audio industry. It lives on today and throughout this year, Shure will be celebrating the technology and its historic 55 series.