The year 1975 was a pivotal time in television news. The old 16mm film era was coming to an end, being slowly replaced by portable video—or, as they called it, “electronic news gathering” (ENG for short).

In 1976, at the NAB convention in Chicago, which I attended for the first time, RCA introduced the TK-76, the world’s first portable broadcast-quality television camera. Coupled with a Sony portable video recorder using ¾-inch U-Matic cassettes, this was first the professional video package for broadcast use. It would, quite literally, change the world.

The RCA TK-76, which weighed 19.8 pounds without lens or battery, cost an astronomical $55,000 just for the camera body alone. With the necessary zoom lens, batteries, recorder and other accessories, it soared to nearly $100,000. The “operational” camera weight—meaning when the camera had all the necessary gear added to actually operate it—increased dramatically. Fully outfitted, the camera was closer to 30 pounds. 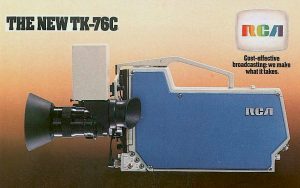 Then, tied to the camera through a thick, heavy cable, was the Sony VO-3800 recorder, which weighed about 30 pounds including battery. Add to that audio mixers, microphones, headphones, portable lights and extra batteries and you were carrying around serious weight. Still, compared to 16mm film, portable video was dramatically faster and cheaper.

Also, in those days, RCA would finance video gear. It held the paper on the equipment at many RCA-equipped radio and television stations in the U.S. It was also a low pressure, paternalistic company. If you couldn’t make a payment one month, it was OK. Just let your salesman know. At NAB, the company had a “financing tent” off the exhibit booth. Like a kid in a candy store, I went in and told the RCA representative that I wanted to finance a TK-76 camera package.

I told RCA my background as a film cameraman and that I wanted to work freelance for the Big 3 television networks with the new gear as they made the transition from film to video. They paid attention and actually took me seriously. They asked how much money I could place as a downpayment on the purchase. I told them all I had was $7,500. They said we had a deal. In less than a half hour, I gave RCA a check for $7,500 and had bought close to $100,000 worth of broadcast gear. I had signed away my soul forever.

By the time I returned from NAB, the RCA and other brands of gear had arrived. My living room was filed with about 15 boxes. As I unpacked, I realized how insanely big and heavy this gear was going to be. Ni-Cad batteries lasted only about twenty minutes each, meaning we had to lug more than the weight of the camera in batteries and chargers on a one-day shoot. The Sony U-Matic recorder was no slouch either. It would take two very strong men just to carry the basic gear alone and a third to carry the extras in a serious news situation. 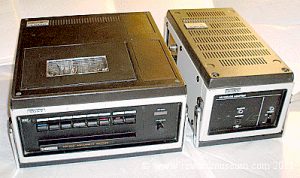 With three tubes, all cameras in this era tended to easily go out of registration, which meant it was necessary to routinely carry a 12-inch monitor in the field. Experienced field producers always demanded a large monitor, since they had learned from experience. By the time we got a reliable package, the TK-76 camera system took at least 20 huge Anvil-type cases to be moved around.

The first network executive I approached about shooting was Don Browne, then the NBC bureau chief in Miami. Don was a friendly man and was glad to find anyone with network-acceptable gear willing to travel anywhere. He hired us right away. Almost from day one, we were working for NBC News.

Over the period from 1976 to 1983, network news made up the bulk of work for my video company, called Television Matrix. In this period, we had up to five complete crews — made up of all freelancers paid directly by the networks. We worked in 27 countries — shooting, editing, feeding and sometimes producing network stories. The jobs ranged from war coverage in Latin American hot spots to investigative journalism to covering Presidential trips in Europe with Presidents Reagan and Carter.

After purchasing the TK-76, we bought other cameras from Sony and Ikegami and much more editing and production gear, including equipment for uploading video from remote locations throughout the world. The networks paid very well for the people and gear and for several years we well exceeded $100,000 per year per camera package.

That would come to a crashing end by the early 1980s when the economics of television news changed forever.