NEP, the nation’s largest owner of mobile television trucks, has launched the first phase of a large-scale, fleetwide project to upgrade the technology in most of its vehicles.

The retrofit is a major effort that will take three years to complete. NEP will upgrade 30 of its mobile broadcasting vehicles in the U.S. with Grass Valley K-Frame modular video processing engines with Kayenne Video Production Center switcher platforms.

“We are launching this large-scale effort with a focus on one of the key technologies behind every live production — the switcher,” said George Hoover, chief technology officer at NEP. “With features such as integrated clip players and the universally accepted Grass Valley interface, the new K-Frame platform will give our productions a huge boost. With 30 K-Frames deployed across our U.S. fleet and seven Kayennes in the U.K., the impact of this major upgrade will be felt by all of our clients.”

NEP will also be launching several new mobile units, as well as retiring several older units from its lineup. The fleet upgrade will take place in cycles in order not to disrupt scheduled productions. 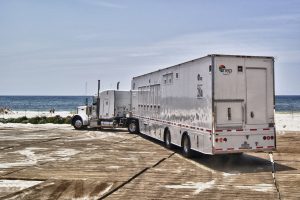 “This project comes on the heels of releasing our next generation mobile unit design, and is another clear step forward in technology advancement at NEP,” Hoover added.

NEP has more than 50 HD production trucks, 3D-dedicated production trucks and a full line of SD, edit and support trucks. Coupled with a complete line of flypacks and camera systems; technical and four-wall studios in New York and the U.K.; custom control room design and integration capabilities; and an arsenal of plasma, LED, projection and digital cinema displays, the company has the deepest pool of equipment assets in the video business.