In 2012, Wohler Technologies, based in San Francisco, acquired RadiantGrid Technologies, a U.K.-based developer of software that manages and automates the file-based workflow of digital media.

RadiantGrid handles digital media from ingest to preparation to distribution, and performs quality control on a range of functions within the video, audio and data.

Wohler bought the company to extend the functions of many of its legacy baseband products into the file domain, insuring a long future for its business.

Based on an extensible service-oriented architecture, the platform integrates with editorial, archive, traffic, business process and rights management systems.

New to the system is a video legalization option featuring Wohler’s RightHue algorithm that ensures NTSC and PAL color compliance within the file-based domain.

But a major question is compliance with what?

In the United States, there are no technical standards for color in the file-based domain. That makes it tricky for companies like RadiantGrid, which is manufacturing gear to be sold anywhere in the world.

In Europe, the EBU has devised a standard for color called Technical Recommendation R103-2000, which addresses “illegal” colors in a way that’s similar to how the CALM Act addresses audio in the United States.

The gamut of possible values in the YUV color space used in television systems is greater than the combinations that can be produced by real combinations of RGB primary signals. So when television signals are manipulated in YUV form, it is possible to produce “illegal” combinations. Those colors can cause a sparkle effect in the pictures and cause images to lose brilliance on the home television sets of certain viewers.

In Europe, RadiantGrid’s technology meets the EBU standard by making sure the R, G and B signals lie inside the range of the standard.

But how does the RadiantGrid system, which starts at between $20,000 and $25,000, function with color measurement with no specific standard in the U.S. What used to be accomplished with external color legalization boxes in the SDI era, no longer work with files. 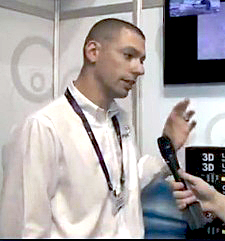 Simon Pegg, senior software pipeline architect for RadiantGrid, said individual U.S. broadcasters are essentially on their own to set up color gamut standards. They can configure the RadiantGrid software to specific customized requirements and it will “process every pixel of every frame” along with other chosen parameters.

The device will deliver the file as the broadcaster requires — whatever that may be.

When asked why the U.S. has no color legalization standard files while Europe does, he replied “that’s a good question.”

In theory, Pegg noted, without a standard one can play a certain video program file on different devices and get variations in color. “On one device it might look fine and on another there might be sparkle artifacts that come from illegal color,” he said, acknowledging that it’s not considered a big problem in the United States.

So for now, U.S. broadcasters using the RadiantGrid system have to choose their own color options and set the device to monitor them.

“The color legalization assures that any output from the processing pipeline can optionally be legalized to meet delivery specification gamut requirements,” Pegg said.

The RadiantGrid system, he said, provides users with choices such as RGB only, RGB + Y (enabling EBU R103-2000 compliance) and the composite (NTSC and PAL) domain in monitoring files in the same way as dedicated baseband gamut processors did with SDI.