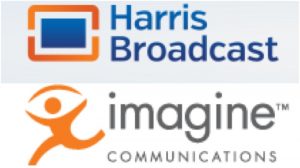 Terms of the deal, which is expected to close after the new year, weren’t disclosed. Employees of Imagine Communications, which also operates a research and development facility in Israel, are expected to join the Harris Broadcast team, says CEO Charlie Vogt.

With the deal in place, Harris Broadcast will give its Selenio product lineup a boost into the world of adaptive bit rate (ABR)  transcoding, says Vogt. ABR is technology that allows content providers to transcode video for multiple devices simultaneously, while making the most efficient use of available bandwidth — a critical component in the over-the-top marketplace where consumers watch content on a slew of devices.

Once Imagine’s technology is integrated with Selenio, the new product will be called Selenio Next, says Vogt, based on the name of Imagine’s flagship transcoder, called Next.

While more traditional broadcasters are launching their own TV everywhere and video-on-demand platforms, the acquisition appears to be geared toward the cable and satellite industry, as a majority of Imagine customers are from the cable sector. At this year’s IBC show, Vogt said he wanted to expand business into the multiple system operator (MSO) space.

“With this type of purchase, Harris Broadcast sees the world going toward multiscreen delivery,” says Joe Zaller, a broadcast technology industry analyst and president of Devoncroft Partners. “They clearly want to be part of that.”

Today, there are only a handful of companies, including Imagine, Elemental and Envivio, that strictly focus on adaptive bit rate encoding. Vogt says Imagine’s technology was a clear fit for Harris Broadcast.

“Looking at their technology and their portfolio, we felt they had a lead on the next-generation adaptive bit rate market,” Vogt said in an interview with TVNewsCheck. “In terms of scale, they’re probably the smallest, but we feel they give us the best opportunity to break into this space.”

“They have a very unique chipset that has some pricing and power advantages against the competition today,” says Vogt. “If you couple their technology with our existing portfolio, we think it’s a winning combination.