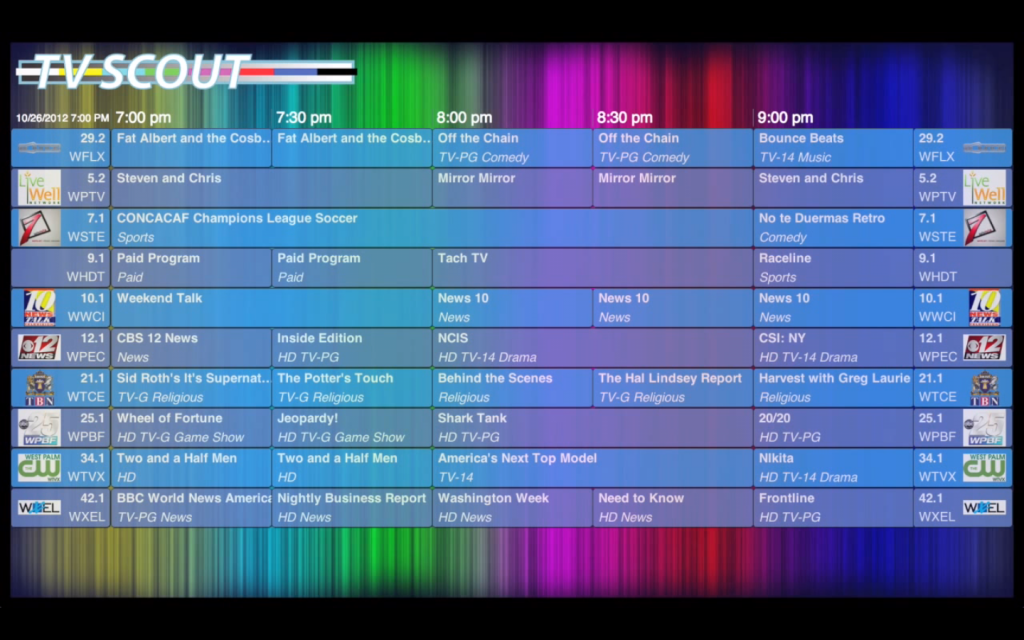 The program grid has made its way to over-the-air television.

A new, Austin, Texas-based diginet called TV Scout went on air in July and is working to land contracts with TV stations around the country for its program grid channel that gives TV watchers an opportunity to see what’s playing over the broadcast airwaves. Today, the network has 12 TV stations broadcasting TV Scout as a secondary channel, including WLFT Baton Rouge, La., and WPB West Palm Beach, Fla.

“Nothing like this has ever existed over broadcast following the digital transition,” says Joshua Castro, co-founder and CEO of TV Scout. “It was something we did out of necessity.”

Today, OTA TV watchers can lookup program guides online, or through a handful of apps, like TV Guide’s app or NextGuide, as was highlighted last week on Playout, but nothing on-air.

TV Scout’s grid lists the over-the-air channels and what’s playing in numerical order over a two hour span and can include a station’s branding logo. Every few seconds, the main channel rotates to show what’s on its digital subchannels.

The network uses a revenue sharing business model, selling ads that lay on top of the grid and splitting the revenue with stations that carry the channel. This video shows TV Scout in action; the ad starts at the 1:06 mark.

TV Scout built its own encoder for its affiliates that are ATSC and EAS compliant. The encoder fits in a  2U-sized box.

Castro is already mapping his plans for when ATSC 2.0 arrives, although he wasn’t talking specifics. The new standard that aims to bring a two-way communication and better video compression to over-the-air television, is currently in the works and is expected to become a finalized standard by 2014. It’ll allow broadcast viewers to store and watch video on demand — in non-real time — and also call up graphics and data, and let marketers broadcast interactive and targeted advertising.

“With set-top box hardware and smart TVs being so prevalent today, a marriage with over-the-top and broadcast TV is going to happen,” says Castro. “You can only keep the genie in the bottle for so long.”