As a cord cutter on a mission to get others to drop their pay TV subscriptions and enjoy the benefits of over-the-air broadcasting, I want to be a cheerleader for mobile DTV. But every time I become excited about a new station lighting up, or a new device being released, I always feel let down.

That’s sort of how things played out this week when I got my hands on the Audiovox MobileTV receiver, Dyle’s latest gadget to get live TV in the hands of consumers. The team at Dyle sent me the new device — along with a coffee mug and pack of Colombian coffee — to play with and review. Perhaps they wanted me to enjoy a hot cup of coffee while watching the Today Show on my iPad.

After you read my review, you can buy the receiver at Amazon for $100.

Unlike past receivers by Elgato and Belkin, both of which I’ve tried out previously, the Audiovox receiver is wireless and doesn’t require the user to plug in a dongle to their iOS or Android-powered device. That was a huge plus for me, as one of my biggest gripes about mobile DTV has been the fact that I have to plug in a dongle to my iPhone with a 6-inch antenna attached to it. My Elgato antenna barely stays connected today after normal use and travel. Belkin’s antenna is better designed, but didn’t perform as well for me as the Elgato.

The little white Audiovox receiver fits in my palm, and could probably be carried around in a pant pocket. The antenna is sturdy, but can come detached from the receiver box. I haven’t a clue why companies like Audiovox and Elgato have manufactured a device that requires an antenna to work, yet still gives us the option to pull that antenna out and lose it along the way.

It’s recommended you charge the device to full power before using it. This takes about 30 minutes.

After powering the receiver on, make sure it’s located near a window, pointing toward the broadcast towers. This isn’t hard for me, as I can see the Denver towers outside my window, perched atop Lookout Mountain. The next step requires you to connect your mobile device — I used an iPad — to the receiver.

Here’s where I first got rattled. 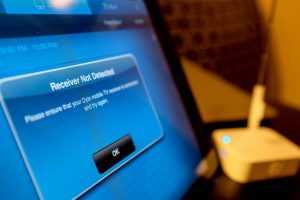 I opened up the official Dyle app, which I had previously downloaded on my iPad to use with the Belkin receiver. Nothing happened. I double-checked the instructions and realized that I needed to download the Dyle Siano app to use the new receiver. Not a huge problem because it’s a free app, but potentially confusing for those who aren’t too tech-savvy.

Once downloaded, I fire up the app, and come to the registration page. You don’t need to register, but by answering how old you are and if you’re male or female, it provides some pretty helpful data to the local broadcaster who could sell some special advertising geared toward mobile users. Remember, at this point, I’m not on my home wireless Internet network; I’m connected to the Audiovox network. When I input my information and hit the register button, I’m told I need to be connected to the Internet. The following happens:

It really does work. It only takes a few seconds to connect with the signal, and the picture looks clear enough to enjoy a network drama or the local news. It was almost a bit surreal at first that I was holding my iPad with nothing physically connected to it, and was watching live TV without an Internet connection.

The instructions say to stay within 7 meters, or about 22 feet, from the receiver at all times. They weren’t kidding. I kept the receiver in my bedroom and roamed around my condo, which is about 900-square-feet. As I walked further away from my bedroom, the picture got fuzzier, and ultimately cut out.

It’s wireless, but it’s like a dog trapped in an electric fence. It can only go so far.

Another thing that surprised (and maybe I assumed too much going into this test) was the fact that only one mobile device could use the receiver at a time. While watching on my iPad, I tried to connect my iPhone to the receiver, but it wouldn’t let me until I disconnected the iPad. This makes sense, as the Mohu Leaf antenna in my living room can’t split off and provide a signal to a TV in a different room.

But wouldn’t it be awesome if Dyle could come up with an enterprise device that allows several devices to connect to a single unit? This could be a huge hit in airports, and an even bigger hit on public transportation.

Should you buy the Audiovox receiver? It does what it advertises, and at least here in Denver, it offers a reliable signal, despite having some cumbersome steps to capture that signal.

If you love local TV and have at least a few stations in your market broadcasting a mobile signal — and don’t mind dropping $100 — than be my guest.

I just don’t think Dyle and the mobile DTV community have cracked the code on mobile TV. Not yet, at least.