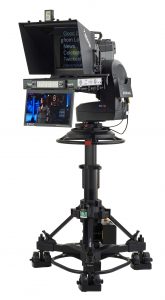 There’s no need for a cameraman inside the studios of Al Jazeera America.

Al Jazeera’s robotics are controlled by a Vinten Radamec VRC controller, designed for use in a configuration, which gives multi-user, multi-facility control of robotic pedestals, heads and elevation units.