Consumers with internet-connected TVs are twice as likely to cut the cord on their pay-TV service compared to those with no internet connection on their television, according to a new report from The Diffusion Group.

This isn’t too surprising, as TV watchers can still experience live television by using an antenna and pulling in crystal-clear HD signals over-the-air, and then satisfy their on-demand programming itch with services like Netflix or Hulu Plus. Internet connected TVs come in the form of smart TVs — sets that come built-in with over-the-top software — or as dedicated over-the-top devices, like Apple TV or a Roku player that hook into a TVs HDMI port. Google entered into the OTT market last month with its affordable, $35 ChromeCast, which looks like a thumb drive that sticks into an HDMI port.

The survey is a little fuzzy, but I’ll do my best to explain. Of the TV watchers who are highly inclined to cancel their pay TV service, 8.8% are connected TV users, compared to the 3.5% of non-connected TV users. The chart below shows the “Mid 3,” which I’m assuming are pay TV subscribers who are on the fence about cutting the cord. The “Bottom 2” are people who have no plans to get rid of their service. 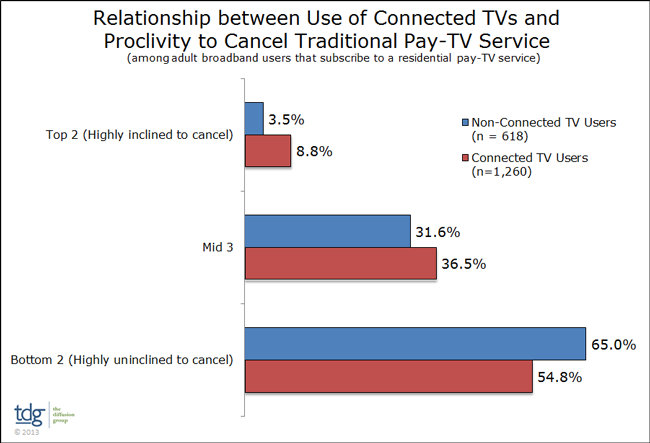 It is interesting to note that those who have no plan to cut the cord is made up of 65% non-connected TV users — about 10% more than connected-TV users. Maybe a birthday or Christmas gift of one of those nifty OTT devices would incline them to cut the cord?

“The data does demonstrate a notable correlation between the two phenomena, one we expect to grow more strongly in the new few years,” Michael Greeson, co-founder and president of the Diffusion Group, said in the report.

My wife and I are part of this “phenomena,” I suppose. We have gotten into a habit of watching the local and network news (I do my best to switch it up between NBC, CBS and ABC) over-the-air while making dinner, and then find ourselves switching to our Apple TV to watch something on Netflix. Right now, we’re working our way through the early seasons of The Office.

As TVs get smarter and more programming becomes available for free, or for an affordable monthly cost, I’d expect our habit to be more focused around the over-the-top (connected) devices. What if NBC released a Roku channel or Apple TV app that let me watch Brian Williams live, or on-demand? Better yet, what if all of my local news channels here in Denver did the same thing? If and when that happens, TV viewers will start to use their set less like a TV and more like a computer.

For now, I’m content with supplementing my over-the-air television use with the over-the-top goodness of an Apple TV.