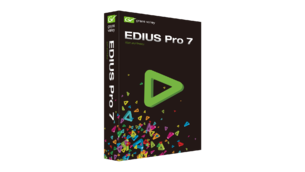 “No other nonlinear video editing software gives users the real-time speed and functionality that EDIUS does,” Mike Cronk, SVP Marketing for Grass Valley, said in a statement. “It’s compatibility with all major file formats, the ability to edit in real-time without rendering — even in 4K with its native 64-bit architecture — means that EDIUS 7 is an ideal solution for either broadcast or post-production environments.”

EDIUS 7 is expected to be released in the third quarter and will be demoed at this year’s International Broadcast Conference in Amsterdam this September. The software is a native 64-bit Windows 7 and Windows 8 operating systems, and is now open to third-party input and output hardware from Blackmagic Design and Matrox.

EDIUS 7 supports any mix of standard definition, HD, 2K and 4K resolutions on the timeline in real-time, with editing performance increasing as CPU power increases. It has also been optimized for multicore and Intel fourth-generation Core i CPU systems.

The software will ship in two versions: EDIUS 7 Pro, which is targeted at the professional, stand-alone user, and EDIUS Elite 7, which is aimed at editors working collaboratively within network-connected production environments.