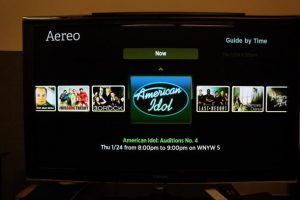 Once I got rid of DirectTV, I began saving about $115 every month. I added Netflix and Hulu Plus at $10 and $8, respectively, and also bought an MLB.TV subscription for $120 to watch the Detroit Tigers, here in Colorado. Services like Amazon Prime and VUDU movie service have tempted me, but at that point, I’d be flirting with another cable-like monthly bill.

Later this year, however, I’ll face a big decision: Do I become an Aereo subscriber?

The consumer in me says, “Why not?” It’s only $8 per month and I can watch my local channels from anywhere in my market on my iPhone or iPad. I’m lucky enough to have an unlimited data plan grandfathered in on my iPhone with AT&T, so I don’t worry about overages. I could see it coming in handy at the DMV.

The broadcast television journalist in me, who covers the struggles and successes of U.S. broadcasters who have been fighting against Aereo, says, “Maybe you should think about this.”

Right now, I watch the local networks for free using my antenna in crystal-clear HD. Occasionally, because I live fairly close to the transmitters, the signal cuts out, probably from bouncing off the buildings near me. But for the most part, it works well and looks great. The only feature of Aereo that tempts me for in-home use is its DVR. If my wife or I miss one of our favorite programs — let’s say Modern Family — we have to wait 24-48 hours before we can stream it on Hulu Plus. With a cloud-based DVR, we could watch it that night on TV in the living room or on an iPad in bed.

Aereo makes more sense for me from a mobile standpoint. In Denver, I only get one station — Gannett’s NBC affiliate KUSA — using my Elgato mobile DTV dongle and app. When my wife takes the light rail to and from work each morning, I could see wanting some variety in what she watches. Aereo gives us instant access to everything over-the-air, plus a few extras. And that’s pretty appealing.

Aereo is expected to expand into 20-plus markets by year’s end, unless broadcasters can stop the company, which is unlikely. At the SNL Kagen TV and Radio Finance Summit in New York this week, Harry Cole, an Arlington, Va., attorney who specializes in mass media said Aereo probably won’t be shut down. “It requires several miracles,” he said.

Will I become an Aereo subscriber? I’ll cross that bridge when I get there, but on paper, it’s looking like a good deal.