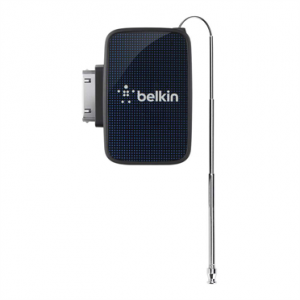 The receiver costs $129 from Belkin direct — $10 more than Escort’s current receiver and about $45 more than Elgato’s (if you purchase from Amazon). The extra cost might be worth it, however, as Belkin’s receiver features a dongle that stays attached to the device, unlike Elgato’s which can easily become detached and lost if your not careful.

iPhone 5 and updated iPad and iPad Mini owners will be disappointed that Belkin’s device is only available in Apple’s 30-pin connector — not the smaller lightning connector. That means an adapter is required to access content on newer iOS devices.

The new Belkin accessory is the first one compatible with the official Dyle mobile TV app, which offers a more colorful user interface than Elgato’s EyeTV Mobile app.