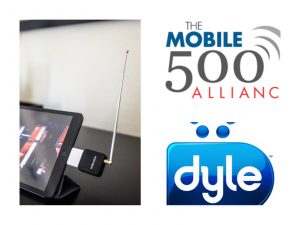 There were more rumblings about a merger between Dyle and the Mobile500 Alliance in Washington this week.

In a panel on mobile DTV at the Advanced Televisions Systems Committee Annual Meeting, Rajan Mehta, chief technology officer of Mobile Content Venture (better known as Dyle), and Sam Matheny, VP policy and innovation at Capitol Broadcasting Co., and a member of the Mobile500 Alliance, agreed that the only difference between the groups trying to make mobile television a consumer success is a business philosophy.

“The underlying goal of Mobile500 and Dyle is to provide a great customer experience,” said Mehta, who is also the executive director of advanced technology at NBCUniversal. “It’s the same technology… this is not a betamax to VHS scenario. It’s all the same standard, just a different philosophy.”

Matheny told the crowd of about 100 broadcast professionals at the meeting that talks between the two companies about a merger are under way.

“I hope to come together and get it worked out,” said Matheny. “I hazard to guess when something like that may happen, but I think if and when it does, we’ll be in  great position to offer a truly comprehensive and unique service.”

The first mention of a merger between the two companies came at this year’s NAB Show, when Mobile500 Alliance Executive Director John Lawson said “Both groups have known from the beginning that we need to unify efforts to be successful. It’s always been a question of when.”

Erik Moreno, Dyle co-general manager, echoed those thoughts at this year’s NAB Show, saying it was a shame that the companies hadn’t come together by now.

In a discussion on ATSC 3.0 Thursday, Moreno said he was a broadcaster in the cooperation business: “And it’s called Dyle,” he said.

“Dyle and mobile TV had a great initial wave of support… but we need everyone to participate to win. At the end of the day, it’s a minimum of $100,000 per station, yet we can’t get cooperation. In this massive amazing vision we have, we are talking about serious innovation and the challenge we need to face, and yet I have hope because at the end of the day, I think the vision is so massive that this is a multi-billion dollar opportunity.”