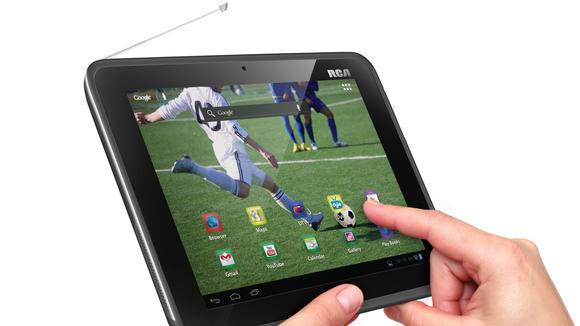 Journalists, including myself, hate admitting when they’re wrong, but I made a mistake.

Not a terrible mistake, but I misled readers when I told them they would have the opportunity to buy RCA’s (I use the word “much-anticipated” loosely) Mobile TV tablet at this year’s NAB Show. You’ll be able to buy smartphone and tablet dongles from Escort and Elgato that let you watch over-the-air broadcasts from stations transmitting a DTV signal, but once again, you’ll only be able to look at the RCA tablet with built-in DTV and ATSC tuner. It’s still not for sale, and no one is really sure when it will be. Maybe next month? Next quarter? I have no clue.

I was a bit confused when a PR guy broke the news to me that the tablet would only be on display at NAB. I clearly remembered reading about this in an official NAB newsletter. On March 26, the NAB sent out an email with the headline: “Broadcasters, Manufacturers And Consumers To Rally Around Mobile TV At The 2013 NAB Show. I’ve bolded the good parts from the newsletter:

New devices are coming to market that enable consumers to receive broadcast TV signals via mobile devices such as smart phones and tablets. Select devices, adapters and applications from Elgato, ESCORT and RCA will be available for purchase at the NAB Store and will be demonstrated for show attendees at a special kiosk in the Grand Lobby of the Las Vegas Convention Center. Products include:

• EyeTV Mobile from Elgato Systems, a compact TV tuner that connects directly to the iPad or iPhone and receives the Mobile TV signal via a miniature antenna (available for purchase during the show);

OK, so perhaps I should have read a little closer. But it did say at the top that RCA devices or adapters would be available for purchase. RCA doesn’t make the dongle adapters like Escort or Elgato.

The NAB would have been the perfect show to debut and sell the RCA tablet. I know my editor Harry Jessell would have dropped $300 to buy one.

It seems like a missed opportunity on RCA’s end for the mobile TV community.